Last week we got our first rain of the season and just like clockwork, I started craving BBQ.

It’s as if my appetite senses summer slipping away and decides I need to pack in a little more BBQ before it’s gone forever. Or, for what seems like forever to a girl who’s craving BBQ.

So I set out to create this delicious skillet of goodness to satisfy my craving in a comforting dish that was just what we needed on a rainy day.

I have a history of baking things on top of cornbread batter, as those of you who’ve tried my Chili Cornbread Bake are probably aware. This time I mixed a little frozen corn into the cornbread batter, made super easy with a box of Jiffy Corn Muffin Mix, and spread it in a skillet. Instead of topping it with chili, I opted for chopped rotisserie chicken combined with tomato sauce, BBQ sauce, red onions, and diced green chiles.

Simple but so effective at handling my craving.

Then it’s time for the cheese.

I used a combination of sharp cheddar and Monterey Jack but I just know pepper Jack would also be an awesome choice.

We thought this was delicious with a drizzle of Ranch dressing and a little chopped cilantro. All totally optional. You could go with sour cream and sliced avocado. Or just a good shake of hot sauce!

I baked this in my cast iron 12″ Staub braiser but you could also bake this in a 10″ skillet if you’d like. Take a look at note on the recipe card below for the details. 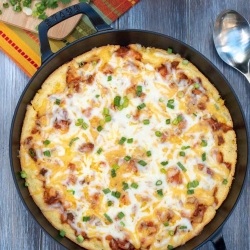 If you use a 10-inch skillet it will yield a thicker, higher profile result and will need to cook a bit longer than if prepared in a 12-inch skillet.