Easy Slow Cooker Cuban Pork with Black Beans and Rice is a satisfying, flavorful meal you can make any night of the week. The pork roast cooks low and slow throughout the day and the black beans and rice can be made just before you are ready to serve.

Bowl meals are one of my favorite go-to recipe ideas for a busy weeknight. They typically involve meat that has been been cooked low and slow until fork tender and easy to shred, and some rice and beans. From there you can go with an assortment of other additions and toppings.

And of course, the best way to create tender, shredded meat while you attend to your busy life is with your trusty slow cooker!

Cuban pork is typically roasted in the oven but I decided from the get-go I wanted to create a recipe that could be done in my slow cooker. I just can’t seem to find the time to babysit a roast while it cooks in my oven these days.

Most recipes will include cumin, oregano, and garlic and some sort of citrus marinade. With the slow cooker method, I’ve skipped the step of marinating the meat because in essence it will be doing just that as it slow cooks for 6 to 8 hours covered with the spices and immersed in the citrus juices. Plenty of time for those ingredients to do their thing.

This bowl full of goodness is so flavorful and satisfying that I don’t think it needs anything extra added. Maybe a little chopped cilantro as a garnish, and okay, a touch of sour cream wouldn’t hurt either. A few slices of avocado is always delicious and some of my guys like to keep the hot sauce close by to spice things up.

Say hello to my little friend. This is a 5-ish pound boneless pork shoulder, also affectionately referred to as a Boston butt. They will typically have a pretty nice layer of fat on one side that can pretty easily be sliced away with a sharp knife. The first step in the process is to trim as much of the fat away from the exterior of the roast as you can.

What you see here in this little dish is a delicious blend of olive oil, cumin, dried oregano, salt, and fresh ground black pepper. Let’s give our pork roast a little massage…

Spread the oil and spice mixture over the roast, coating all sides.

The spice coated roast takes a turn in a heavy skillet – cast iron is best – in hot olive oil. Cook it for several minutes, turning as needed to brown it nicely on all sides.

Transfer the browned pork roast to your slow cooker and pour in some chicken broth, fresh orange and lime juice. Sprinkle with a good amount of minced garlic, tuck in a bay leaf, cover and set the slow cooker on LOW for 6 to 8 hours.

Hello beautiful! The roast is ready when you can reach in and shred it easily. Shred it as much or as little as you’d like and press the meat down into those flavorful, citrus, cumin and oregano infused juices.

You can use this shredded pork for a variety of different purposes but it’s wonderful served up with Easy Cuban-Style Black Beans and rice like I’ve done here. 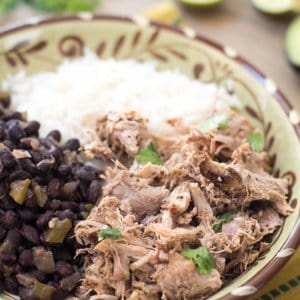 Slow Cooker Cuban Pork with Black Beans and Rice is a satisfying, flavorful meal you can make any night of the week. The pork roast cooks low and slow throughout the day and the black beans and rice can be made just before you are ready to serve.
0 from 0 votes
Print Pin Rate
Course: Main Course
Cuisine: Cuban
Prep Time: 20 minutes
Cook Time: 8 hours
Total Time: 8 hours 20 minutes
Servings: 8
Author: Valerie Brunmeier

LOVE MY RECIPES? GET THE COOKBOOK!
The Foolproof Family Slow Cooker and Other One-Pot Solutions 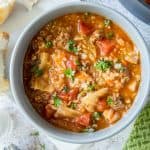 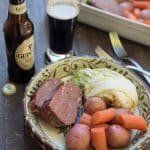 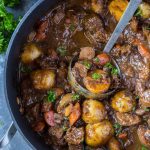 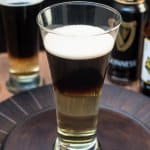 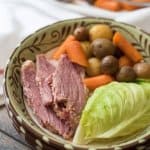 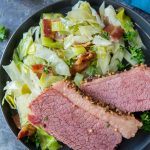 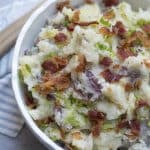 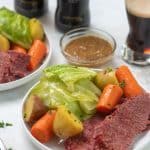 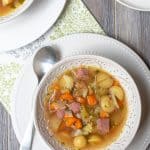