Put your slow cooker to work and free up oven space on the holiday with this tender Slow Cooker Ham with Peach Thyme Glaze.

When I’m planning a menu to feed a good sized group for the holidays, or really for any occasion when I’ve got lots of folks to feed, I almost always include a ham. I know I’m not alone here and there’s no great mystery as to why ham is such a popular choice. They are incredibly easy to prepare, quite economical, and usually provide some really great leftovers. Yay for leftovers!

While you can definitely go the oven route, I like to use this slow cooker method to free up my oven for my other dishes. Since we typically have a pretty good number of people here for Christmas Eve, I like to offer both a beef and ham entree to be sure I’ve got enough. Plus, those leftovers! I need those leftovers so I can laze around the next day, eat ham sandwiches and make Slow Cooker Split Pea Soup.

The cut I go with most frequently is a bone-in spiral cut half ham. Check Costco for a great selection of these Kirkland Brand Applewood Smoked Cured Spiral Hams at a very good price. They come fully-cooked and sliced so it’s just a matter of creating a glaze and heating it up. Literally. They also come with a glaze packet which I promptly toss so I can make my own from scratch.

Start by melting a couple of tablespoons of butter in a small saucepan and then add a good heaping tablespoon of fresh thyme leaves. Allow it to simmer until the butter is nice and golden in color and the thyme is very fragrant. Ahhh, wonderful.

Simmer the glaze for just a minute or two, remove it from the heat, and set it aside.

Place your spiral cut ham flat side down (bone side up) in your 6 to 7 quart slow cooker.

What you see here is a half ham that weighs in at about 8-1/2 pounds in my 6 quart slow cooker. It was just about flush with the top and I was just barely able to cover it with the lid. For the best result and to be sure you’ll be able to squeeze that baby into your slow cooker, I recommend going with no bigger than a 6 to 8 pound ham. How many it will serve will depend on whether it is your only entree but you should plan for at least 1/2 pound per person or more if you’d like lots of leftovers.

Pour that wonderful glaze over the top.

Place the cover on and set your slow cooker to LOW. Remember, the ham is fully-cooked so we just need to cook it long enough to warm it through. This should take anywhere from 3 to 4 hours for a 6 to 8 pound ham. Hams have a tendency to get dry and tough if you let them cook too long so plan accordingly and resist the urge to cook it on HIGH.

I like to transfer the sliced ham to a foil-lined dish and drizzle it with some of the cooking juices and Peach Thyme Glaze left behind in the slow cooker before serving.

You could use a fancy platter just as well but when serving a group I’m partial to keeping things simple!

For another delicious choice check out my Maple Glazed Spiral Ham. 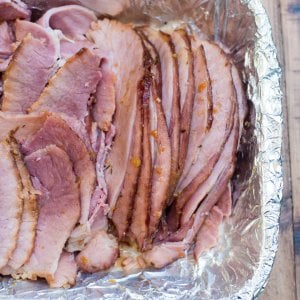 LOVE MY RECIPES? GET THE COOKBOOK!
The Foolproof Family Slow Cooker and Other One-Pot Solutions