A lovely, fall-inspired take on traditional cornbread that is slightly sweet with just a touch of spice. Serve it the next time you make a big pot of chili or have a slice with a bowl of soup. 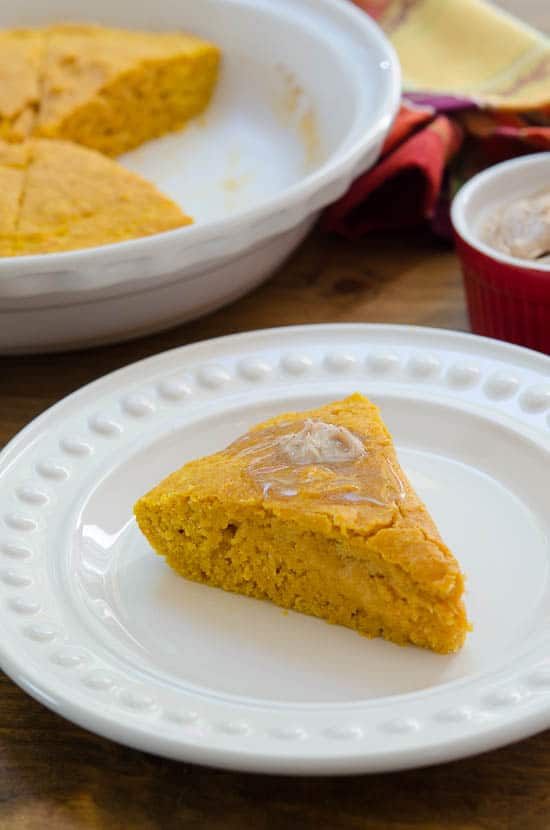 We celebrate two birthdays in our family in the month of October. Boy #3 and Boy #4 were born exactly two years and two days apart. I remember celebrating Connor’s 2nd birthday and feeling I might need to drop everything and head to the hospital any second and then, just two days later, hello Adam. He came into this world loud and strong and apparently not as happy about the whole thing as I was. But, it didn’t take long for him to become the auburn haired, smiley guy that he is today. The first thing I noticed about him were his hands – they were exactly like his Dad’s (perfect for water polo, of course) and then his mouth that seemed so big for such a tiny baby. He got that mouth from his Dad too and I knew  that one day he’d have the same smile. And, he does. And, it just about breaks my heart…in a good way.

On Monday we celebrated Connor’s 22nd birthday over dinner and cheesecake (Connor’s request) and Adam joined us via FaceTime from his off-campus apartment in Santa Barbara. His great big smile shining out from the computer screen as we all sang happy birthday.

This all has absolutely nothing to do with cornbread but it’s October and that always makes me reminisce about my babies. 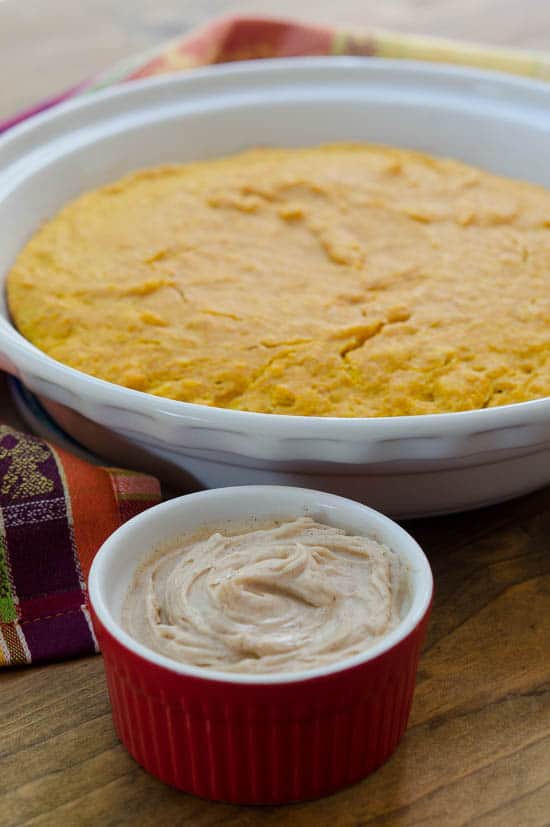 Now, on to the cornbread. This recipe is adapted from my Rustic Sweet Cornbread with Honey Butter. Adding a little pumpkin puree and just a touch of pumpkin pie spice to the cornbread makes this a fabulous, festive addition to your meal at this time of year. I went very light on the spice because I didn’t want to overpower it and wanted the classic flavor of cornbread to shine through. The cinnamon honey butter compliments the pumpkin flavor perfectly. 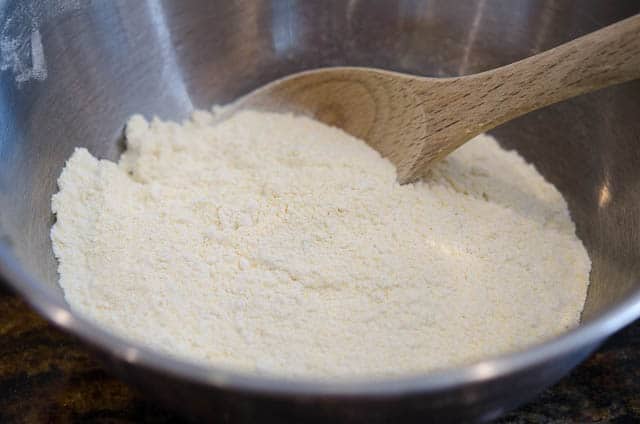 Making cornbread is easy as can be. Combine the dry ingredients in a medium mixing bow. Flour, cornmeal, baking powder, salt, and pumpkin pie spice. See the printable recipe below for the exact measurements. 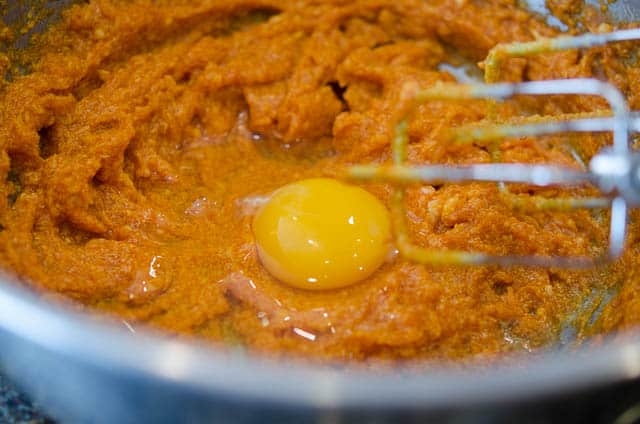 In a separate large mixing bowl use an electric hand mixer to combine the softened butter with the sugar and mix until well combined. Add the pumpkin puree and then the eggs. A quick ingredient note – this recipe calls for 3/4 cup of pumpkin puree which means that you’ll have just about 1 cup leftover from a 15 ounce can. There are tons of recipes out there that call for 1 cup of pumpkin puree so place it in an airtight container in your fridge and you can use it for another recipe. 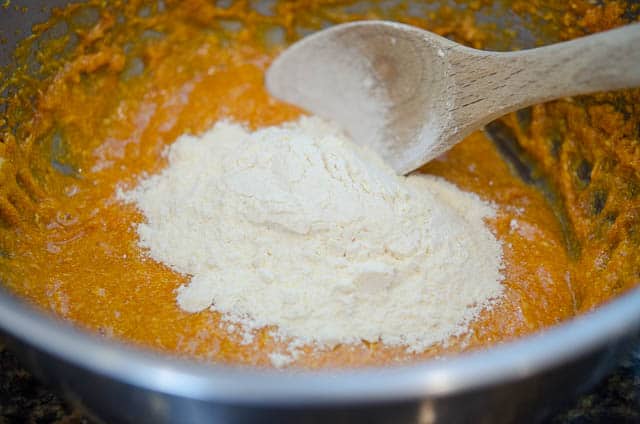 You’re done with the mixer. Grab a wooden spoon and add about 1/3 of the flour mixture. 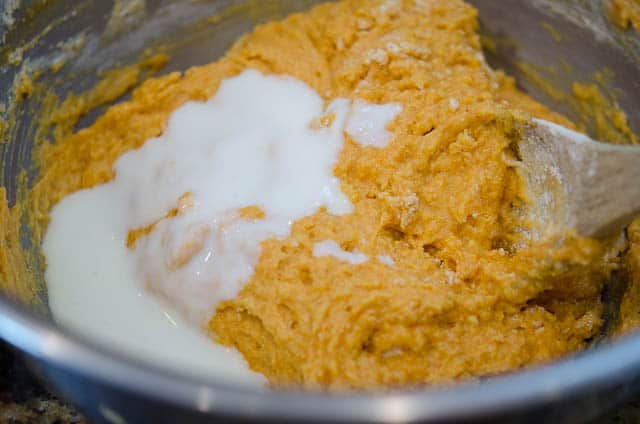 Alternating with the buttermilk until all of the flour mixture and buttermilk have been added. 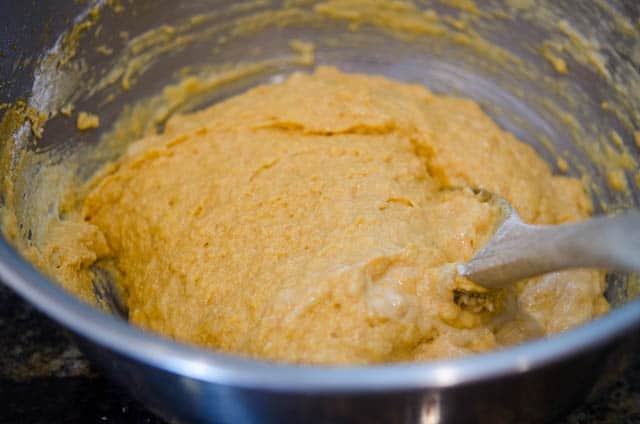 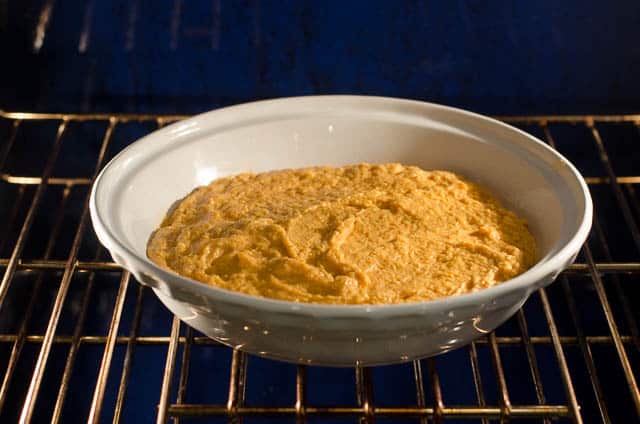 Transfer to a 9″ to 10″ baking dish that has been coated with non-stick cooking spray. I used a deep dish pie plate which works perfectly. You can also do this in a cast iron skillet and I’ve included instructions for that on the recipe below.

Pop the cornbread into a 400 degree oven and bake for about 30 to 35 minutes. Pull out of the oven when an toothpick inserted in the center comes out completely clean. 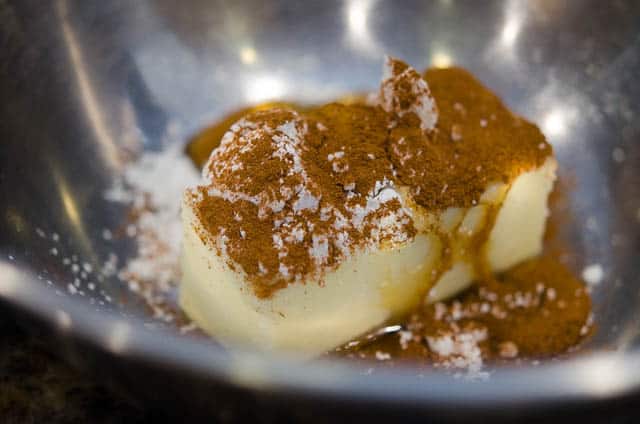 Meanwhile, prepare the Cinnamon Honey Butter by beating together one stick of softened butter, a little powdered sugar, honey, and cinnamon.

Beat the mixture well until it is completely smooth and creamy. Transfer it to a small dish and refrigerate until ready to serve. 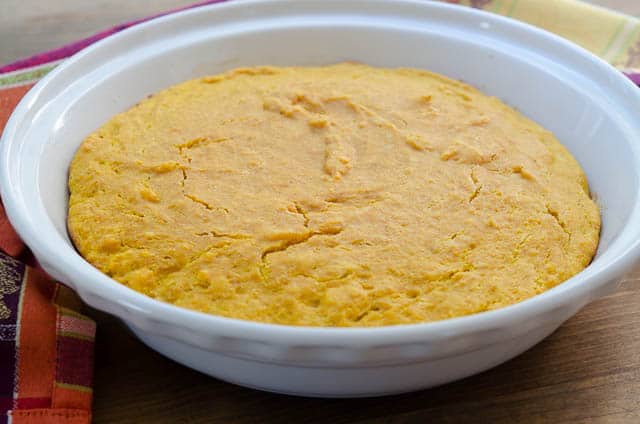 Allow the cornbread to cool for 10 to 15 minutes. and it will be ready to slice and serve with a generous dollop of Cinnamon Honey Butter. 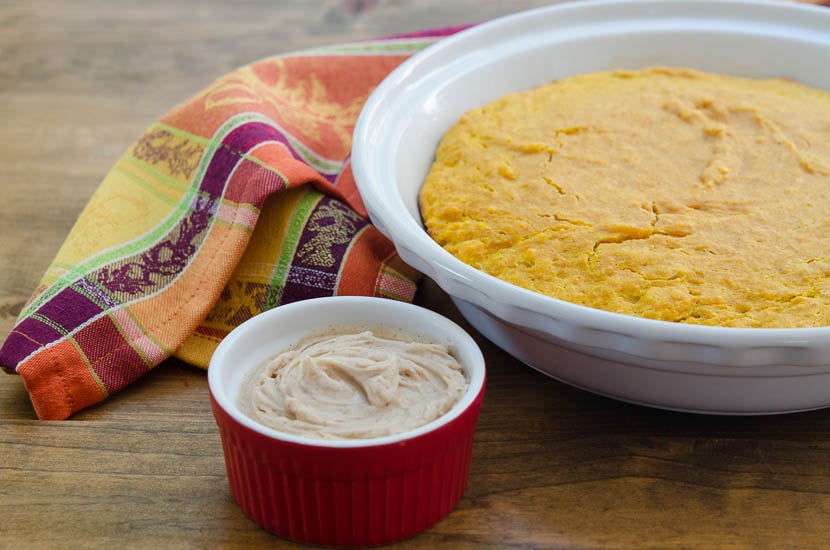 If you feel so inclined, you could even drizzle a little extra honey over the top of the whole thing. I won’t tell. 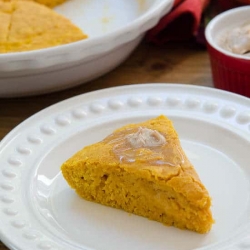 For the Pumpkin Cornbread:

For the Cinnamon Honey Butter:

Did You Make This?We love seeing what you've made! Tag us on social media at @fromvalerieskitchen for a chance to be featured