This Slow Roasted Barbecue Brisket cooks low and slow in a rich, flavorful sauce. Delicious on sandwich rolls or on all on its own. 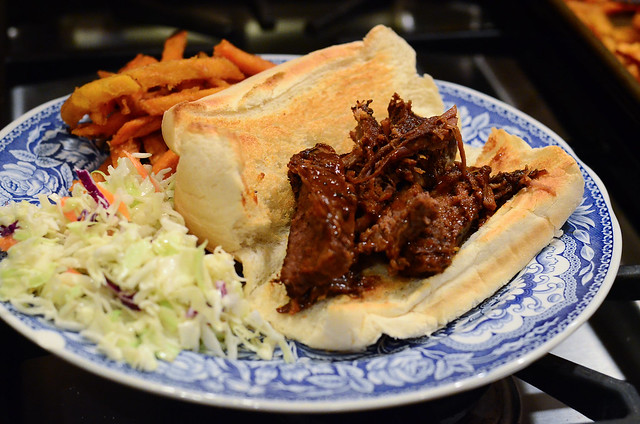 As I get ready to put up our Christmas tree and deck the halls with boughs of holly, in the back of my mind I’m dreaming about barbecue.

When the weather cools down and we can longer run out to the grill, I pull out this recipe to satisfy our craving for barbecue. Okay, maybe it’s mostly my craving for barbecue. I don’t know what it is, but every now and then the feeling just hits and I’ve got to have it. This is one of the recipes that gets me through till grilling season.

It is delicious served on sandwich rolls, as I did here, but I also love to serve it up with mashed potatoes and roasted veggies. The luscious sauce is perfect poured over the top of it all.

The ingredients are staples in my pantry so anytime I spy a nice brisket at the store, I know I can throw this together. If you don’t see this cut at your local grocery store, Costco has really nice quality, big briskets available most of the time. If you are cooking for a crowd, double it up and cook two. 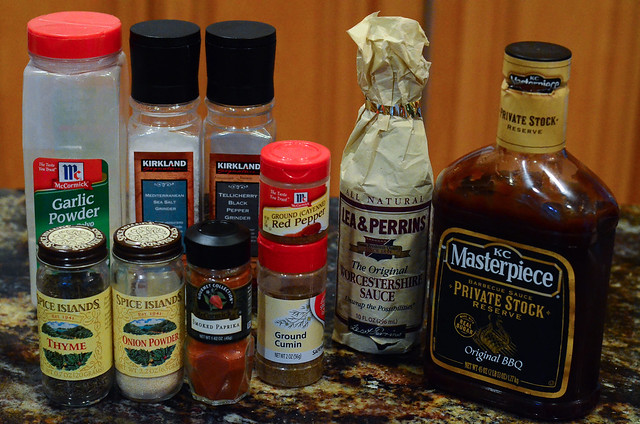 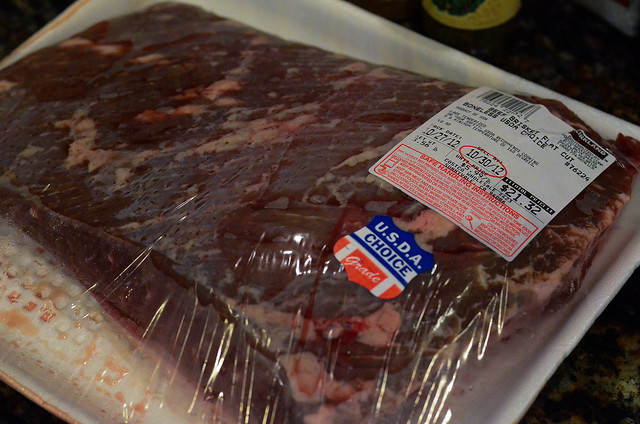 And, the star of the show – a 3-1/2 to 5 pound beef brisket. Figure at least 1/2 pound per person when deciding what size to get. You can keep all the other proportions in the recipe the same if the size of the brisket falls within this range.

It’s hard for me to pass up a nice brisket so I tend to buy and freeze them so I’ll have them on hand for when the brisket craving strikes. 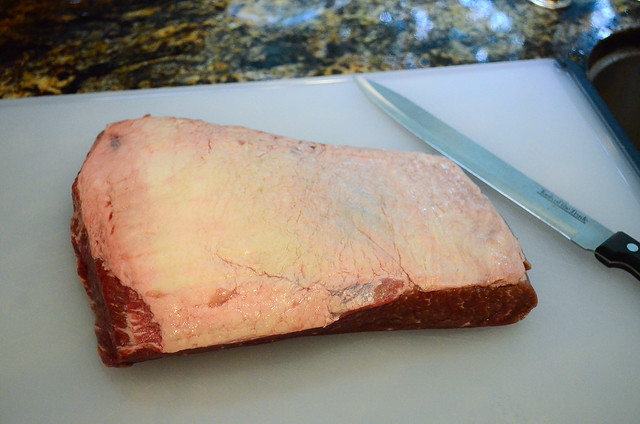 There will be a thick layer of fat on one side of the brisket. I prefer to cut the sucker off before I roast it so that the drippings stay mostly grease free. However, if you leave the fat layer, it will come off very easily after the initial roasting period which I will talk more about below. 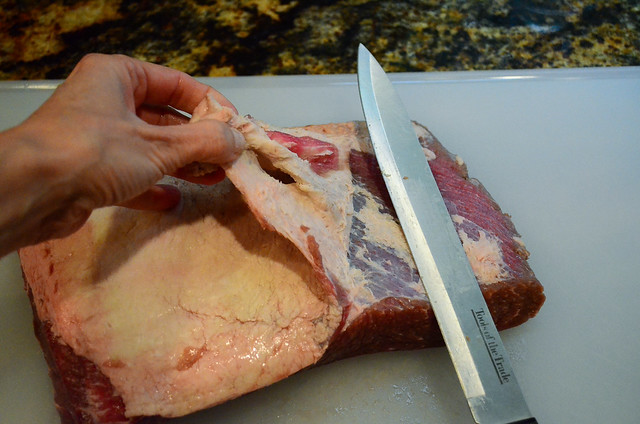 To remove the fat before roasting, use a sharp knife to slice through the edge of the meat and cut through the fat, pulling as you go. 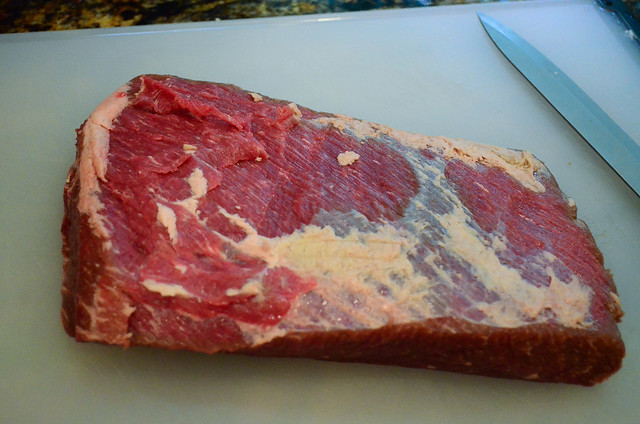 Don’t be concerned if a little fat remains. A little fat is a good thing and will add depth and richness to the sauce. 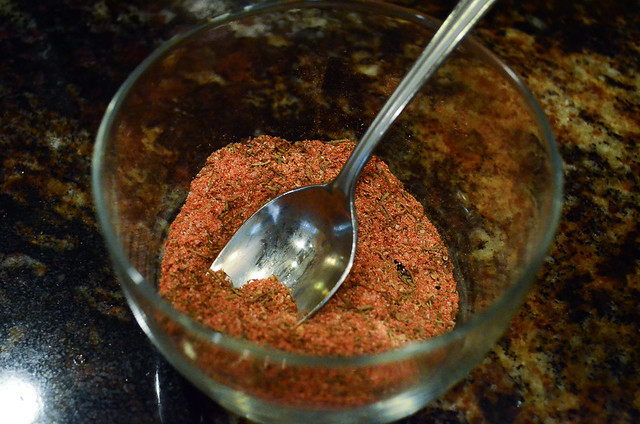 For the spice rub, mix together all the dry seasonings in a small bowl. Thyme, smoked paprika, freshly ground black pepper, salt, onion powder,garlic powder, cayenne pepper, and ground cumin. The cayenne will give it a bit of a kick so if you’re concerned about the heat level, reduce the cayenne to 1/4 teaspoon.

Paprika alert! There are many varieties of paprika available. Be sure you’ve got smoked paprika. It adds a great smokiness to the brisket that you won’t get from regular paprika. 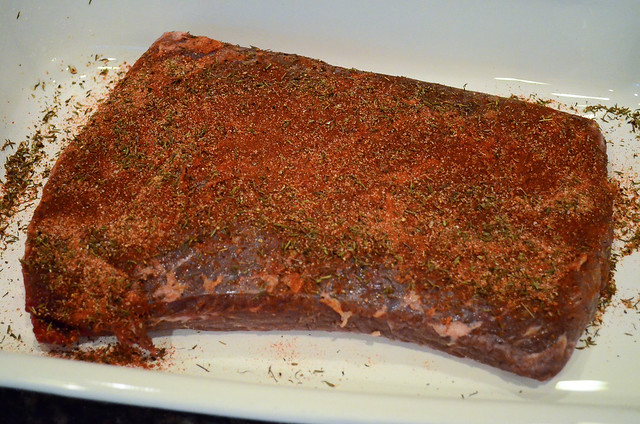 Coat both sides of the brisket with the spice rub, using your hands to spread it evenly over the meat. 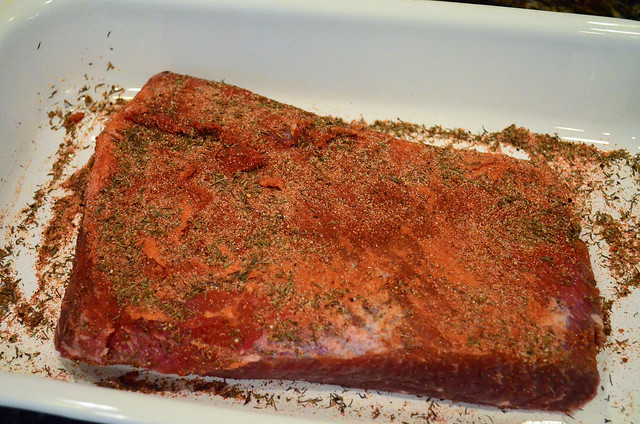 Place the meat fat side or trimmed side up. 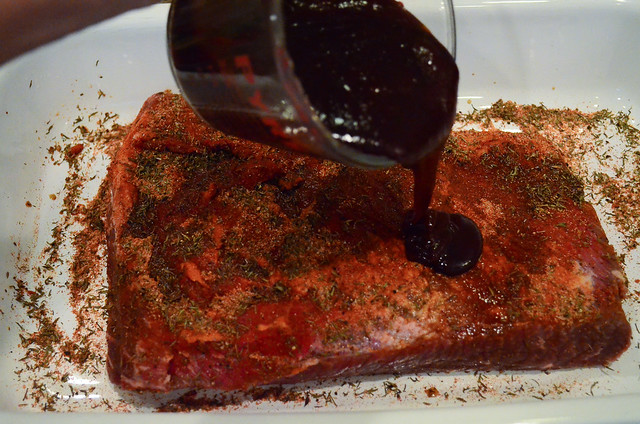 Pour 2 tablespoons of Worcestershire sauce over the surface of the brisket and then pour on the barbecue sauce. 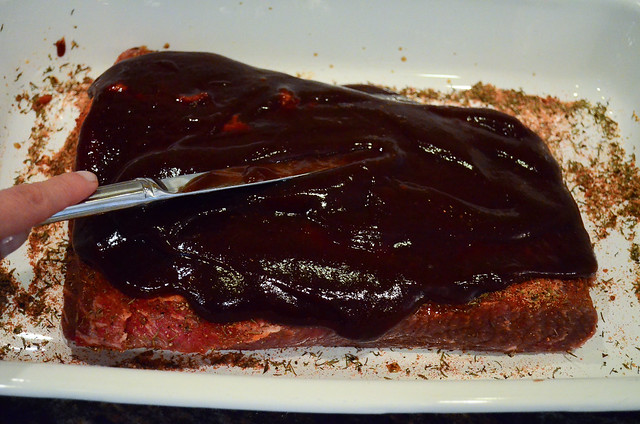 Use a knife to spread the sauce out to cover the entire surface of the meat.

Cover the pan tightly with foil and place in a preheated 300 degree oven. Now walk away and don’t look back for two hours. 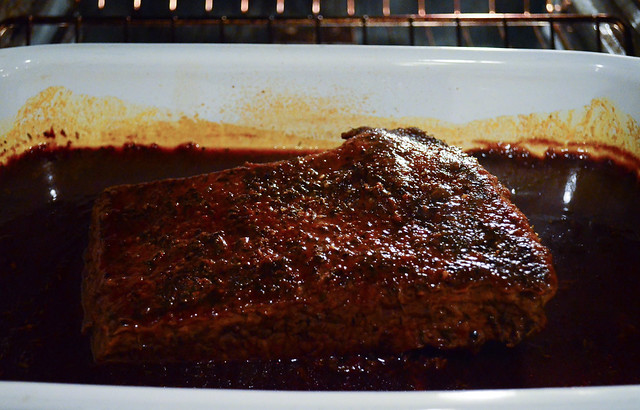 Two hours has elapsed, your house smells heavenly, and you’ve been asked repeatedly “when’s dinner” which means it’s time to remove the brisket from the oven. If you did not previously remove the fat layer you can do it effortlessly now. It will scrape off with a knife just like buttah.

Now flip it over so the other side can cook in the rich, wonderful sauce that has been created during the cooking time. Cover the pan back up with the foil and return it to the oven for about another hour or slightly longer, until fork tender. 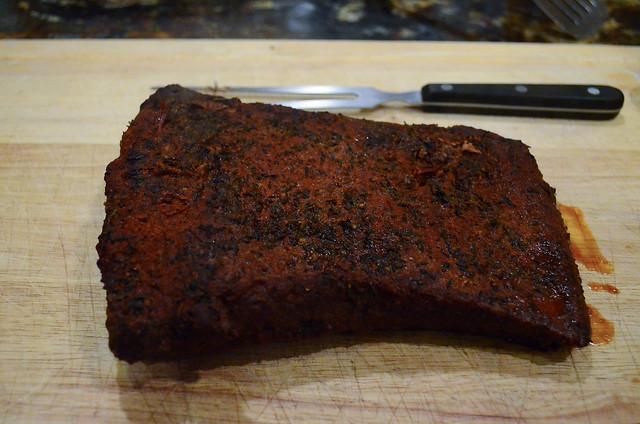 After the end of the cooking time, transfer the brisket to a cutting board. 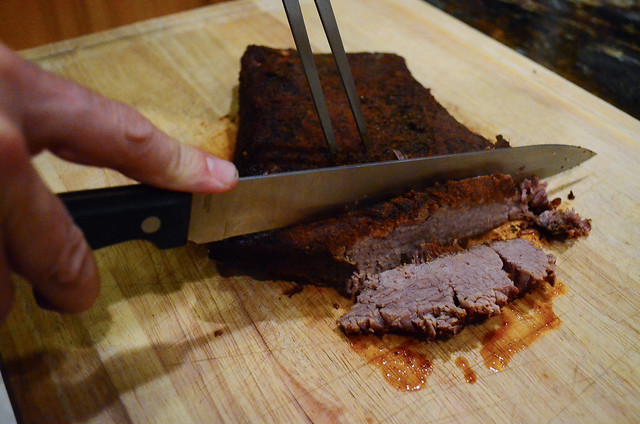 If you look closely at the meat, you can see the grain runs a certain direction. For the best result you want to be sure to slice the brisket against the grain. 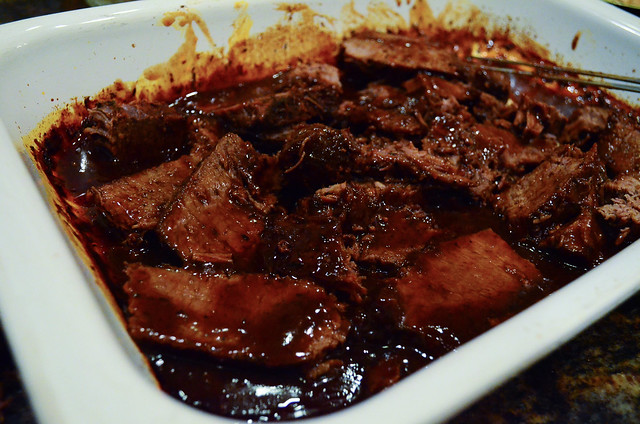 Return the sliced brisket to the crazy good sauce. 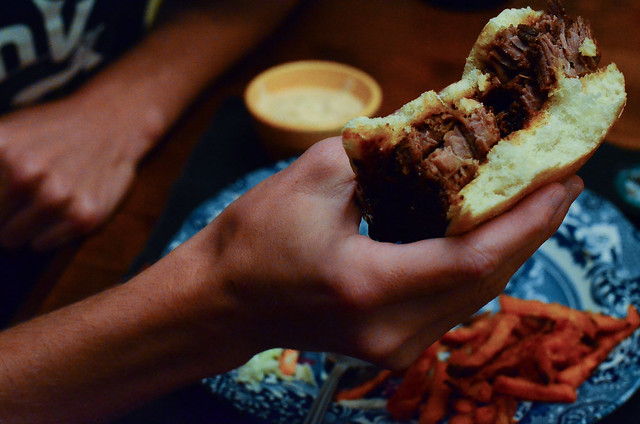 Boy #4 had almost half his sandwich consumed before I got over there with my camera. I guess that should tell you something. 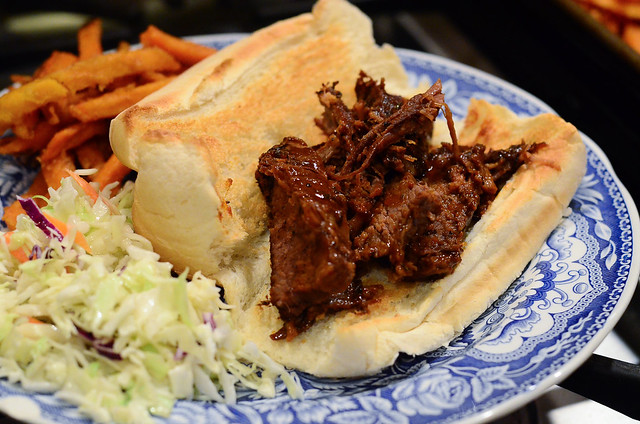 This recipe is great for this time of year when the house is full of folks coming and going, the kids are home from college, and friends and relatives are visiting. Easy, down home comfort food at it’s best.

Take a gander at these other cold weather BBQ recipes.

This Slow Roasted Barbecue Brisket cooks low and slow in a rich, flavorful sauce. Delicious on sandwich rolls or on all on its own. 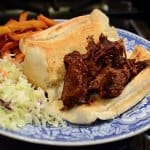 Check out my brand new cookbook, The Foolproof Family Slow Cooker and Other One-Pot Solutions! 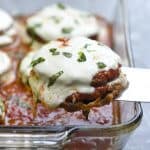 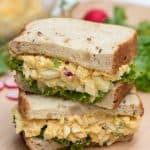